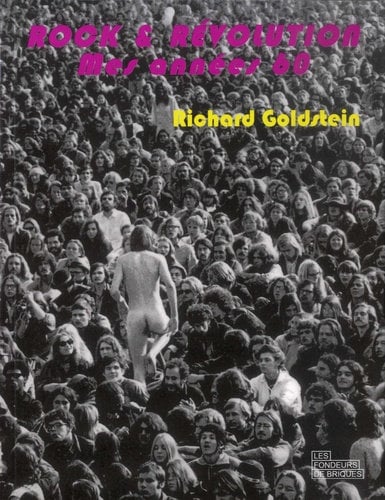 One of the first rock critics recounts this tipping point in the history of the United States (1965-1970) through the prism of the music scene and protest movements.

THE AUTHOR:
Richard Goldstein has always been passionate about the counterculture, through rock, political protest and gay rights. His style of New Journalism has found expression, in addition to the Village Voice, in the New York Times, Harper's or The Nation. He is the author of, among others, The Poetry of Rock, Reporting the Counterculture and Homocons: The rise of the Gay Right. He teaches at Hunter College in New York. This is his first book translated into French.
THE BOOK: Richard Goldstein is first and foremost a music fan. Born in Manhattan in 1944, raised in the Bronx, he will be, by his own admission, the first of his family to distinguish Hegel from a bagel! Under the influence of James Joyce and Tom Wolfe, he was twenty-two years old when he proposed to the Village Voice (co-founded by Norman Mailer) to hold a column on music news. He will become one of the first rock critics to hold a regular column, "Pop Eye's". His biased and committed style will be his mark, going so far as to exhaust the Beatles' Sergeant Pepper — which he later regrets — or other rock icons. Until 1969, he covered most of the rock news, spending long periods of work and high with Brian Wilson of the Beach Boys, the Grateful Dead or the Doors during the recording of one of their records. He will form a particularly close relationship with Janis Joplin (which explains the original title of this book). Her death in October 1970, after that of Jimi Hendrix the previous month (Jim Morrison followed them in July 1971), marked the end of her belief in the revolutionary potential of rock 'n' roll. He then turned to more political subjects: minority rights, black and homosexual in particular, gender issues, going hand in hand with his choice to fully assume his homosexuality. He will be close to Warhol's Factory, the Black Panthers and the Yippies, the organization of Abbie Hoffman & Jerry Rubin, an iconoclastic attempt to spread far-left ideas in Nixon's United States. He paints a portrait from within the protesting America of his dreams and disillusions, with humor and lucidity.